IMPACTS AND CHALLENGES OF CLOUD COMPUTING IN MOBILE APPLICATIONS 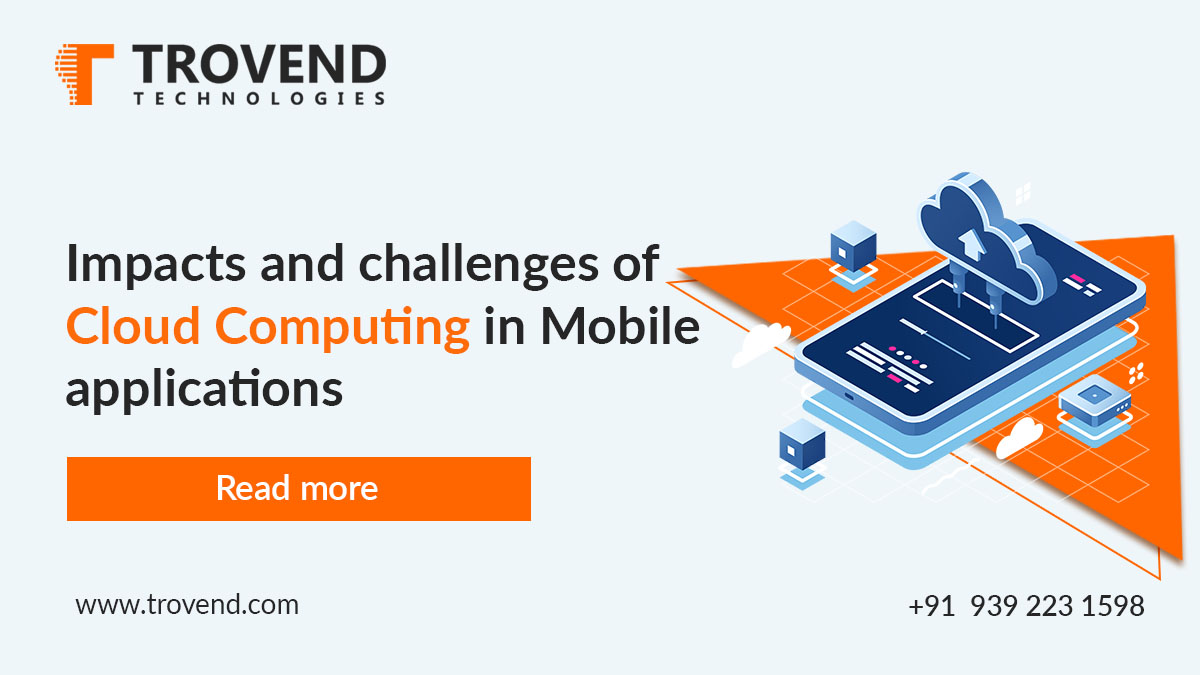 The rapid growth of technology and internet access has made it possible for software developers and users to store and communicate with information in a way that has never been imagined before. The availability of infinite storage and the cloud’s limitless computing capacity has allowed developers to achieve new levels of functionality. While many businesses have made the transition to cloud computing, some still hesitate to integrate cloud computing into their process of developing mobile apps.

Indeed, native apps have remained the standard until now; the new advances in the field of software development have taken mobile cloud computing to the forefront. As cloud technology grows further, without adopting cloud computing for mobile apps, there will be little way for businesses to achieve success.

Cloud Computing, what is it?

Depending on its functionality, offerings, operation, and implementation models, the concept of cloud computing is constantly changing. Cloud computing is commonly characterized as on-demand network access to a pool of resources without any contact with the provider of services.

In simple terms, cloud computing means that sections of essential resources are instantly and conveniently available to consumers who are paid on the basis of use.

In addition, cloud computing enables users at a given time to change their storage capacity based on their requirements for a given project. Without sacrificing on the efficiency, consumers don’t have to worry about the computing power or storage and get the desired performance.

A mobile cloud app is a mobile application that runs across the cloud and can be accessed. While there are native features of cloud apps and utilities, a large part of the processing is carried out on a remote cloud server.

The need to create different apps for various OS platforms has been minimized by cloud computing technology. Cloud mobile applications are accessible with all platforms, unlike native apps, minimizing both the cost of production and time.

Developers can create a single app and deploy it simultaneously across platforms such as Android and iOS using cloud computing technology. Since the app is stored on the cloud instead of a platform, as long as they have a secure internet connection, users do not face any connectivity problems.

Although a native mobile app’s development costs tend to differ based on the app’s functionality, architecture, and overall complexity. But it definitely isn’t a cheap affair.

Cloud apps; on the other hand, as there is only one app that you have to build for different platforms, it decreases the expense of creating the app.

For small companies or startups that do not have large budgets to support a native mobile app for Android and iOS, the use of a single codebase is an optimal option.

Scalability refers to the characteristic of an application that expands its functionality and features to satisfy the increasing demand of users. The scalability of the framework comes at a significant price for native and hybrid applications. In reality, the complexity and cost of scalability for an app that has to scale along a company’s growth can also surpass the initial cost and complexity of development.

Apparently, with cloud apps, any time you make improvements to the software, users don’t have to add new features on their computer or upgrade their apps. This can, of course, be done in native apps too, but compared to cloud mobile apps, the cost and complexity involved are much higher.

Furthermore, users can also encounter poor experience in the event that the developer does not thoroughly test the new features for bugs. This can lead to users either uninstalling your app, switching to the app of your competitor, or poorly reviewing it through app stores and channels for social media.

All the data from a cloud-based app is stored on a remotely located cloud server that can be accessed via an internet-connected device. Cloud applications, as they run from a browser, often remove the installation process.

Therefore, for proper service, cloud apps do not need space on the mobile device. And if a device has low storage space, the user doesn’t have to free up space on the phone in order to access a cloud-based app. They usually operate like web-based apps and can be accessed from the central server directly.

It is all about offering a mobile application in the cloud through a cloud service provider and then delivering it to end-users with an internet connection using the principles of cloud computing in mobile applications.

There are several barriers to the elements involved in this phase that delay the advent of cloud-based applications. Below, we address some of the big challenges that cloud mobile apps raise.

As they store and process data from users, security is a primary concern for cloud apps. Companies that build apps need to collaborate with third-party cloud service providers to ensure that all user authentication, access control, and general communications security protocols are enforced, and steps are taken to implement them.

Users need to have a secure internet connection to get seamless access to a cloud app. Sadly, most areas of the world also suffer from low-speed access to the internet.

Although most providers are now offering 4G/LTE services to fix connectivity problems, it is still far from being mainstream. As such, users can not access the rich features of cloud-based applications that need quick access to the internet.

Although the mobility feature is offered by mobile devices, lower processing capacity, memory and network bandwidth are expensive.

The shortage of mobile infrastructure is an important problem for cloud-based software adoption. In order to operate high-end cloud-based applications on smartphones, the gap between desktops and mobile devices must be reduced.

In the near future, the use of cloud computing in mobile apps is going to be a major trend. In the idea of cloud-based mobile applications, advantages such as scalability, compatibility, and cost savings add a whole lot of substance. It’s still a technology in the budding stage, however. Outsource Trovend Technology Pvt.ltd mobile app developers to build, test and publish your mobile cloud application.