DISADVANTAGES OF CLONING AN APP BY TROVEND TECHNOLOGY 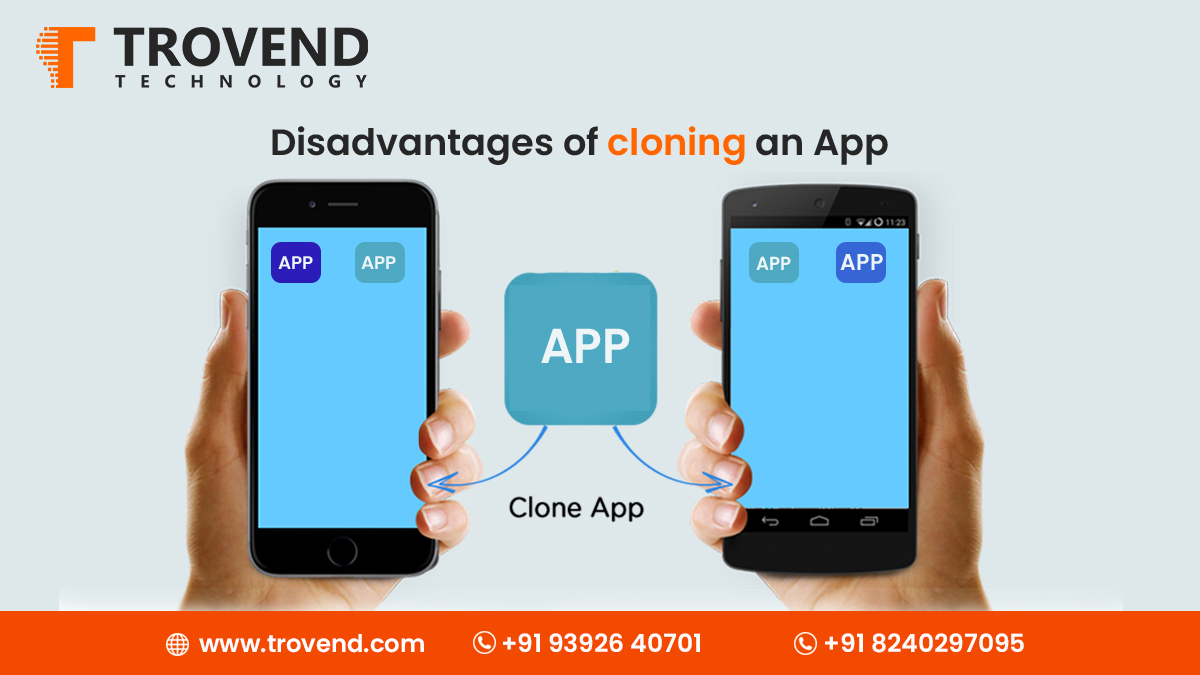 Mobile apps play a huge role in our lives. We can do transactions like banking transfers and Electronic Fund Transfer (EFT) very easily, thanks to mobile devices. Additionally, applications for credit cards and payment arrangements are done conveniently using mobile devices. Over recent years, the number of e-commerce as well as the transactions made from mobile devices have also increased. Diverse civil and tax transfers, such as e-government, have become available as mobile applications.

The problem of security of personal data with related social media accounts has emerged. The mobile devices contain very valuable information from this point of view, and process very sensitive data as well. This is also because of this that mobile apps are being targeted. As a result , consumers need to pay more attention to the software they download from their mobile devices.

Suspicious malware is increasingly finding its way into mobile phones through “cloned” versions of common apps, and legitimate software vulnerabilities.  An overview of how users are affected by the cloned malware applications is given.

The cloned applications are mainly run by Android app stores from third parties. Because these threats are initiated from third-party app stores on Android devices, applications can also be downloaded from multiple sources, and users can download and install unverified apps.

The cloned app has the same components for the interface which make it look like the official app. Users do not know the difference when downloading and installing the cloned App and entering their phone numbers because their phone numbers show so they can interact. The main point that defines the actual app apart is a space at the end of the publisher ‘s name. An ordinary user can hardly understand this threat. Using this app, as users exchange sensitive information , people with malicious intent can have access to their data, and therefore their information.

The consequences of cloning an App

1. Security: Malicious cloned App privacy vulnerabilities are becoming a growing concern for mobile phone owners. In some cases, cybercriminals can take advantage of an app’s popularity by creating a clone that can extract personal data, or even allow an attack to gain device control. With a cloned Automation Switching system, user protection can be at risk because one simple JavaScript could leak all of your app / user data, attackers can capture the individual information. Some actions also include calling without permission from the user; sending, tracking, and receiving SMS messages; and monitoring geolocation. The malware obtained root access in the worst situations, which allows uninhibited control of everything on the mobile device including sensitive business details.

Cloned malware applications can also steal money from a digital wallet. One of the known malware programs “is disguised as an Adobe Flash Player update or another legitimate utility application,” and can take over a digital wallet to send a money transfer to the server of the attacker.

2. Lack of data storage control: Another downside of malicious cloned apps is that they can exploit phone resources. This can make the phone extremely slower and very inefficient. Moreover, battery usage may be surpassed by these devices. These cloned applications absolutely suck up the resources of the phone. In certain situations, the user would not be able to do more with the mobile, even by turning it off.

3. Authenticity: A cloned app asks the user to enter the username and password for authentication purposes and will collect the contact details, then to steal conversations and photos stored on the device.

4. No customization support: although this Clone App developers have built up a similar feature, the Application Cloner does not provide anything extra, apart from enabling you to adjust the colour of the app icon.

5. Possible rejections by Google or Apple as violation / copy rights: Applications that already duplicate Applications in the play store can be denied. App store / Play Store Review Guidelines, applications that aim to clones from other apps can result in you losing access to all of your customers who use them.

At Trovend Technology what are we offering?

Leaving your project’s identity and future in the hands of a small predefined template is a huge risk that can cause major trouble to your company. For this reason, our recommendation is that you opt for a mobile app development company in India, as the country has been having the leading software development and services companies.

We’re one of the best native app development companies in India at Trovend Technologies so we can take care of your project. We have experience in mobile application development, customized to our customers’ needs and preferences, as well as personalized attention that a simple Clone application won’t deliver. Our applications, Native App Development: those developed for a particular operating system’s programming language, such as Android or iOS, and which take full advantage of the application features.  We offer additional support during 3 months of the project being submitted to the App Store or Google Play:

It’s really important to create a mobile application, which can become the foundation of how your company does business. That is why it is best to employ a qualified mobile app development company in India like Trovend to start your project, where we will take care of your business with a thorough understanding of your needs, We will be there from beginning to the end to make your app a successful one, continuous contact during development and design, and a complete cycle from A / B testing to uploading the project to your selected application stores.